Today was something of a first for me. I drove down to Rugeley earlier to visit a primary school where two classes of year four students (8 year olds) were waiting to interview me for a newspaper article they are writing.

I set up to play a song for them before the interview started, and this was where my first surprise happened. When I asked the teacher what she would like me to play, she put the question to the pupils. One lad then piped up and asked for 'The Small Hours'. Turns out they had been watching videos of me on YouTube! It's always nice to get a request for one of my own songs. It doesn't happen very often!

After that the questions started. The kids were really great actually, asking all sorts of things about me, my music, my inspirations, my career and my life outside of music. I played another song halfway through ('Where We Came From') and at this point another teacher was invited into the class who had seen me play at Village Coffee! I'll be back there again on Saturday from 2pm, if anyone fancies it :)

A few more questions later and I finished off with a cover of 'In My Life' by The Beatles. It was great fun and hopefully I'll be back there again in the not too distant future.

The pupils asked me loads of questions and I'm pretty sure I answered all of them. Some invoked quite deep answers, such as 'Do you think you would be able to play guitar better if you had two hands?' and 'What inspires you to write songs?'. I also had questions on what pets I have and what my favourite colour is! It was quite nice that no-one mentioned either the X Factor or One Direction until the very end of the interview too! 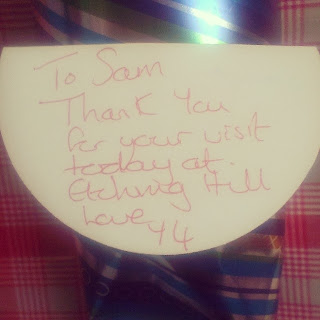 All in all I had a great time, and I look forward to hearing about how the newspaper articles come out :)
Posted by sam at 06:01