My open mic nights have been suffering a little recently. As you know, I lost the night at The Woodman a few months back, but to add to that The Three Stirrups in Brewood closed just before we were set to put another night on there. I only heard about it because the landlord at The Hartley Arms told me. Still, I bare no grudges. I know the pub was really struggling and the boss there would have had much more on his mind than letting me know about the closure. 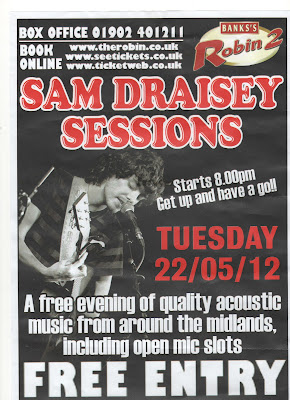 But then last week's Robin 2 open mic, my newest and most exciting venture, had a relatively poor turnout too. The standard of musicianship on show was very high, as usual, but the attendance was not as good as previous months, and all of the events so far have not yielded huge profit margins for the venue. So when Mike from The Robin phoned on Wednesday, I was fearing the worst, and I was even more fearful after the conversation, where I was given 2 days collect my thoughts and promotional ideas before making a judgement on whether to take the night forward.

I am, however, pleased to say that after some pleasant negotiation and compromise, 'The Sam Draisey Sessions' at The Robin 2 are safe for the time being. Moving forward, I am going to need to try and get more people in to the nights, possibly to perform but more-so to watch. But that is the fun in promotions, is it not?


A nice, relatively happy little story for you there. I'm back at work and returning to normal after Easter now, so I should hopefully be back in the studio soon. I've given myself until the next Robin open mic to finish the album mixing. Wish me luck!

Hope you are well, and to see you at a gig soon :)

I've not been in the studio this half term week, instead I've been off on a few different excursions, some music related, some not.

As a side note, I went to play at the open mic on The Sabrina Boat in Shrewsbury on Tuesday night. though it was pretty cold, I'd recommend it to anyone when the weather gets warmer. Open mic on a boat is great fun!

Onto Friday and we see the main purpose for this blog. I had agreed to play some live music at an old football friend's wedding in Ilfracombe, Devon at a place called Tunnels Beaches. The place is amazing by the way, but that's not the point of this story. It's a 400 mile round trip, and I was looking forward to getting out on the road and feeling like a 'proper' musician again. Having Kayla with me only made this an even more pleasant experience :)

As the car was going to do a lot of miles, my dad gave it a once over before we left, making sure it wasn't going to run out of oil or water or anything else that could be prevented by a simple 5 minutes with the bonnet up. We then set off on our long jaunt down the M5.

Unfortunately for us, the M5 is a very popular motorway for people wanting to head to the south coast for the bank holiday weekend. So about two hours into our four hour trip we got stuck in  crawling traffic for a hour or so. That's where the fun started.

It seems my little car, recently topped up with just too much oil, does not like traffic (who does??) and began to get a bit impatient. And by impatient I mean warm. Very warm. So warm in fact that it cut out on the outside lane of the motorway just before Bristol, approximately 100 miles from where we were going, and indeed the same distance from home. A quick phone call to my dad, the AA and then the police followed before the 40 minute wait with only my worrying about not being able to fulfil both a musical contract and a favour for a friend and the unsavoury jeers and taunts of passing motorists for entertainment.

In typical defiant style, I decided to try the ignition 'one more time', and a with a choke and a rumble Zigfried (Ziggy, for short) jumped into life. I managed to manoeuvre myself onto the hard shoulder, where a further call to the police cancelled our rescue and we made the decision to continue on our journey. The next 100 miles left us unscathed and we arrived with just enough time left over to set up and get changed before hitting the stage. I don't remember much about the performance other than an overwhelming sense of relief for getting there at all! Most musicians would announce upon their arrival that it was 'a pleasure to be there'. I felt like that on a number of levels!

The journey from Bilbrook to Ilfracombe took six long hours during which I thought my only mode of transport had been irreparably destroyed 100 miles from home. Was it worth it?