It seems this Vs. thing could become a theme for my blogs. Recently I've been looking at overwhelmingly one sided arguments on the subject of 'what's better for musicians: Twitter or Facebook?' 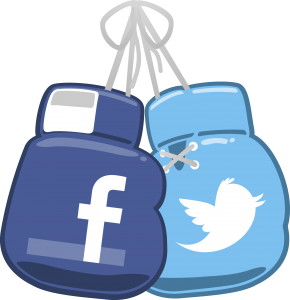 I say one sided because they all draw the same conclusion; Twitter is better. It all really boils down to this hugely unpopular facebook reach algorithm thing, where you only actually see around 5% of the posts from a facebook page unless they pay to have that percentage raised. The comment section arguments always seem to split into tribal factions around this point, with some people complaining that 'musicians always want something for nothing' and the other side arguing that Facebook moved it's 'free and always will be' goalposts in order to make money with no warning or time given to adapt. I would argue that everyone really wants something for nothing (isn't that what destroyed/continues to destroy the music industries established model?) But also rich people will often (notice I said often and not always) be greedy and when they see an opportunity to make vast amounts of money they will take it. I'll openly admit to thinking the Facebook pages thing would be great forever and so neglected to build my mailing list (as every good little musician should), so have been stung by this. Am I upset about it? Not really. 'The rich will get richer'. Now the young have to get wiser.

Get wiser and start using Twitter more, it seems.

I don't rant on this blog very often, but I just witnessed something that made me feel the need to. This blog is intended not only to document what I'm doing with my music but also to give my views on different parts of the industry, good and bad, which will in turn hopefully advise others and create debates to which we can all contribute and from which we can all learn.

I just left a Facebook group for UK wide promoters as an argument broke out about paying acts. Old chestnuts such as 'getting paid for your hobby' and 'I don't mind paying if people come' were banded around.

I get that some people do this as a hobby. I play in a function band that works essentially on that premise (though The Replicas are something of a hybrid between a hobby and a professional outfit due to the differing influences within the band). I also have no problem with that whatsoever. In many professions professionals can get twitchy about people offering services that they would charge for for free, or at least for a vastly reduced rate (photographers, for example) but my view is that, with music being as subjective as it is, it doesn't matter. It doesn't matter to me that a million people are playing guitar and singing for free because they don't play what I play, how I play it. If my music is good enough that my fans will feel it worth paying to watch, hear or own, then I'm not effected by people doing it for the love of it. In fact I salute them. It's great to find something that you really love doing.

The 'I don't mind paying you if X amount of people come' line infuriates me both as a musician and as a promoter. Not only is it deliberately vague, so even if 1000 people came they could still argue that they never promised you anything, but also it's just plain lazy on a promoter's part. In my experience there are two types of well attended gigs. Firstly, there are the gigs where the band or bands on the bill have a known following in that area and are the main attraction to draw people in. In this case the bands should be letting their own fans know about the show and the promoter should be advertising in the local area to pick up the people who didn't get that message. If both do their job it should work. Secondly, there are the venues and promoters that are known for certain types of gigs and their quality and so have an attraction almost regardless of who is playing. Here bands will still be contacting their own fans and promoters will be be promoting in the local area to bring in people who might like the type of show being put on. If both of these happen it should work.

My point with all of that is that if a promoter backs themselves to put on a night that they think is going to work, they shouldn't be relying on a door split to 'maybe' pay the band. If they have booked the right line up to attract the clientèle they are looking for and promoted the event well enough, they should be confident enough to pay a band a discussed amount that they are worth. If the promoter has done the majority of the promotion work, they should be the ones rewarded if 1000 people do turn up. If it's just the band, their friends and family, then frankly I don't think a promoter should get paid at all.

Going back to the original argument, the worst part of it was that there were musicians sticking up for the promoter's stance that that mythical beast 'exposure' was more important than getting paid. I agree that in some instances exposure has been enough to make me take a gig. These have been when I have been offered the chance to support a well known or established act that I have felt would put me in front of a new audience of people who may enjoy my music. In these few cases I have been vindicated in my decision, as they have often led to a bumper night of CD sales and further bookings as support for acts or in new venues which can pay. However, that was a situation where I took a calculated risk financially that ended up paying off. It's not worth doing if you just being promised that the other acts are bringing people who won't have seen you before and the manager of the club might come and watch you for 30 seconds in between bar shifts.

The Facebook group argument then had an incredible claim made on it that the reason for there 'being so many shit bands out there' was down to people putting on free gigs and bands being given publicity that they didn't deserve. I hardly feel that this warrants any response, but I will just say that, as I stated above, music is entirely subjective and what one person likes another may hate. If anything this claim should be directed at lazy promoters who will book anyone just to fill a space on a line up and don't try and marry the acts on a line up to create an enticing event. The idea that the gigging circuit should be more selective in order to weed out less audibly acceptable bands is incredibly dangerous to any local music scene. There is an obvious catch 22 staring me in the face from that remark that I fear must have been lost on the original poster.

To conclude (and before I turn into a grumpy old man!) I'd like to state that I don't think that all promoters are lazy. Some work especially hard and they are the ones that get the reward for it. These are the promoters that people want to come and play for, the ones that create a reputation for themselves of supplying quality music, usually of a specific style, and can often generate their own following. I saw a post on Twitter the other day that said 'Think you don't have a favourite record label? Check out your CD collection and you might be surprised'. This is the sort of thing that happens with good promoters too. The kind of promoters I enjoy working with. The kind of promoter I strive to be.
Posted by sam at 10:05 No comments: