Here it is, the official track listing for my new album, 'As I Live and Breathe'. 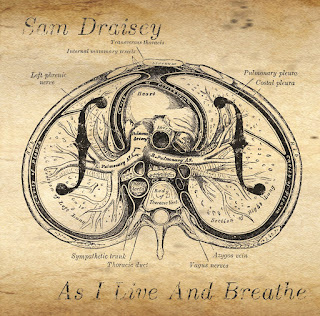 I'm delighted to announce that my new album is finished and will be called 'As I Live and Breathe'. I'll be releasing the track list soon for you to check out :)

What do you think of the artwork?
Posted by sam at 07:55 No comments:

How long is too long?

I'm about 3 songs away from having my album mixed, and I'm really happy with the way it's going so far. The only thing is, it's around the 45 minute mark already. It won't quite get there, but it will be up close to an hour by the time it's done.

Is that too long? Would you listen to an hour of music by one artist?

I'm also aware that it's been a long time since I've released anything, and keeping all the tracks on there feels like a good way to repay people's patience. Plus, if I hold tracks back for my 'next release', there is a decent chance that when I get around to that, I'll either forget about the songs I left back or won't want old stuff on a new record, so they will never come out at all. Plus different people will like different tunes, so more songs gives me more chance of having something someone will like.

What do you think?